Please go through this document before coming for the workshop! Note that you may need to free up about 10GB worth of space for this workshop. We also recommend using a computer with at least 8GB of RAM

The main piece of software we will be using for this workshop will be Android Studio! Android Studio is an IDE (Integrated Development Environment) used for developing Android applications.

Go ahead and run the installer and follow the instructions. When you encounter the choose components screen, make sure Android Virtual Device is selected. 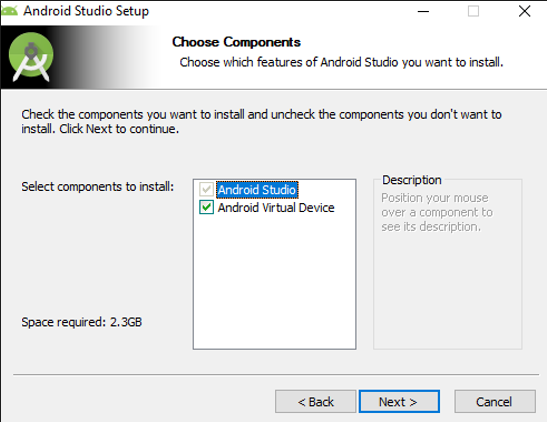 Android Studio has been installed, but it still needs to download some dependencies, such as the Android SDK(Software Development Kit) and JDK(Java Development Kit). Open up Android Studio, which should prompt you with a Setup Wizard. We recommend selecting Standard as your installation type. Just follow the instructions and the Setup Wizard should start downloading your components for you!

Let's proceed with the Java tutorial!(For those who have never touched Java before)